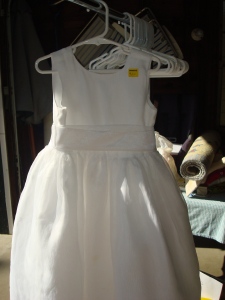 I had my first garage sale over the weekend. It was beyond exhausting, but what surprised me the most was emotional part. I was not prepared for it. It was like watching “This is Your Life” except that greedy strangers appear and snatch up your memories and haggle over them.

There was this one woman who grabbed my daughter’s little navy dress with the white polka dots. Elizabeth wore it to my cousin’s funeral when she was just a baby.  My cousin had died tragically young from a drug overdose and we were all shattered. In that dress, on that day, Elizabeth was my only source of light.

As she nuzzled her fuzzy head into my neck and drooled on my black cardigan, I felt comforted. When she took her fingers out of her mouth and flashed her wet gums to strangers, I knew she was providing the best form of bereavement counseling.

I wanted to go over and pull that dress out of her hands. That little dress was my tiny reminder that when pain nearly stops our hearts, new life arrives to show us that we can smile again.

Then there was the yellow Ralph Lauren duvet with matching pillow shams.  I remember the day my husband and I bought it.  We had just gotten back from our honeymoon and were giddy, in love and clutching fast cash made from returning wedding gifts.

Emboldened by the fresh start ahead of us, we splurged on the silky Egyptian cotton linens. We were so happy to be appointing our married life with much finer things than our single ones could have afforded.  We were naïvely certain that the days of crappy, irregular sheets from the deep-discount table at Bed, Bath and Beyond were behind us.

On some level, selling that duvet felt like acknowledging the end of the newlywed belief that married life will always be exciting and fun. Though considerably faded, I wasn’t sure I was ready to abandon it completely.

Nearby in a bin of books sat my tattered copy of Pat Conroy’s “The Prince of Tides”.  It was one of my first pleasure-reads after college while vacationing in Arizona. As I lay in the sun scalding my skin a dark pink, I fell in love with Tom Wingo’s gorgeous South Carolinian prose. It was the first time I would ever think of an author’s words as lyrical because, well — they were.

That book marked the beginning of my great love affair with books to which I remain besotted for life. I had marked my first lover “50% off” — which shamed me more than just a little.

And then there were the little froggy rain boots we bought at a beachside gift shop. Once during a rainstorm, Caroline put them on with her fanciest pink nightgown and went outside to dance like Gene Kelly.  She was so deliciously transported into her own world that I raced outside to take her picture for which she posed proudly.

Those boots marked my little fashionista’s first awareness that very often it is indeed, the shoes that make the dress.

I looked at the bits and pieces of my life sprawled out before me and I thought: that’s it. I simply could not part with any more of it. I nudged my way in amongst the shoppers in their fanny-packs.  I was ready to start pulling stuff from the sale when I was stopped by a woman with a thick Irish brogue.

She wanted to confirm the size the gauzy, white flower-girl dress Elizabeth wore in a wedding last December. She was buying it to send “back home” to her sister in Ireland. She said it would be perfect for her niece’s first holy communion.

I had a vision of a red-haired girl wearing the dress in an old Irish church and I was pleased beyond belief. I know it’s predictable to say “think of all the new memories your things will enjoy”, but in this case, I was totally fired up.

That’s when I knew I would be okay.

3 thoughts on “Garage Sale of a Lifetime”

Authors Whose Blogs I Stalk

Dreaming of Somewhere Else

Good Friends in Other Places