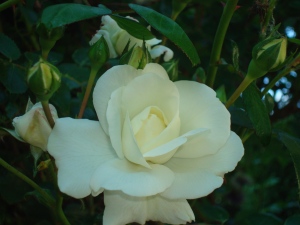 I need to put my small-town business aside for a moment to talk about the passing of Tim Russert.  I’m so sad about it. I seem to be taking it personally — and it’s not just because he’s been so integral to my Sunday morning ritual. It’s more than that.

I come from this crazy, politically charged family. Both ends of the spectrum are fervently represented, from my right-wing activist parents to my left-wing idealist uncles. No one takes it all lightly either, and what results is a big, bad blurring of politics and personal.

My dad likes to throw out red meat emails to provoke my uncles, ostensibly to debate, but really – I think – because he misses them. They, of course, respond in kind — blasting back passionate arguments from their side, leaving my dad unconvinced but later, (surprisingly) puzzled why they’re not closer.  When it comes to these family political “debates,” scores are never settled, no one ever agrees and damage gets done.

I can’t claim to be above the fray either. My mom and I had a recent scuffle over a political email she sent me.  It was an attack on a candidate’s character, and I responded furiously by attacking hers.

Once at a dinner party, my husband called the hostess a communist.  We were three minutes into our conversation and grilled salmon when he burped up that assault. He was horrified.  I was practically under the table.

Must politics always be so mean?  It doesn’t take long before our discussions veer into anger. It’s like road-rage on our personal values.

I read Maureen Dowd and I can’t get past how bitter she seems. I watch Sean Hannity and I think – that guy is an asshole. Bill O’Reilly may claim a “no-spin zone” , but the guy is always cantankerous and growling, ready to pounce.

And then there was Tim Russert –razor sharp, but jowly and twinkling. He wasn’t angry about politics, he was downright gleeful. Perhaps that’s what made him so effective. When you watched his show, you knew he wanted to get all of the answers – so we could judge for ourselves

That is what I’ll miss the most. I learned a lot by watching his show. Tim Russert’s classroom was safe from playground bullies. Politics were to be appreciated and respected. He seemed to enjoy the process as much as the ideals, and his enjoyment was infectious.

Sunday mornings will never be the same.

Authors Whose Blogs I Stalk

Dreaming of Somewhere Else

Good Friends in Other Places